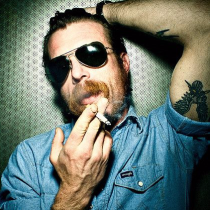 Jesse Hughes is best known as the frontman of the rock band Eagles of Death Metal (EODM). Hughes formed Eagles of Death Metal in 1998 along with lifelong best friend, Queen of the Stone Age’s Josh Homme. They released their debut album, Peace Love Death Metal in 2004. EODM subsequently released Death By Sexy (2006), Heart On (2008), and Zipper Down (2015). Hughes has recorded two solo albums as Boots Electric, Honky Kong (2011) & EODM Presents Boots Electric Performing The Best Songs We Never Wrote (2019). His music has been featured on several soundtracks including, The Cabin in the Woods, Silver Lining Playbook, Epic Movie, and Super Troopers 2. Hughes has been the subject of two documentaries, VICE’s The Redemption of the Devil (2015), and Colin Hank’s Eagles of Death Metal: Nos Amis (2017). He also hosted two seasons of Vice and Marshall Headphone’s On The Road, interviewing some of the industry’s most influential musicians including Bill Ward of Black Sabbath, Ian Astbury of The Cult, Brian Tatler of Diamond Head, and Patty Schemel of Hole.

Articles By This Author

SHUDDER’S August 2020 Highlights include LA LLORONA, THE SHED, and Many More…

Fans of horror will be delighted on what’s coming to Shudder in August 2020! The month starts out with Rob Savage’s shot-in-quarantine, Zoom-based Shudder Original